The basic elements of industrial IoT such as M2M connections and access to historian systems are relatively easy to find in big mining installations. Nevertheless the real potential of this technology has not yet been unleashed.

Major OEMs today are already providing remote services to improve their maintenance responses -mainly by reactive troubleshooting and configuration of control systems to reduce the cost and time related to traveling to remote locations. These activities usually include vital sign checking and trend analysis in order to prepare health status reports, including a descriptive statistics summary and recommendations.

But this approach can be substantially improved, taking advantage of big data -captured in real time by sensors- and remote connections to machines, by broadly applying predictive analytics to develop solutions aimed at avoiding downtimes by “generating predictions” and moving from  “what’s happening” to “what’s going to happen”.

This is not something new and has been in the market for around 12 years, starting with rotating equipment running at power plants or on aircraft, where failure may result not only in loss of competitiveness, but also in catastrophic situations. The technology is now however gaining more traction, also in industries such as mining, perhaps as a result of the coming to an end of the commodities super-cycle -that kept the focus on high production rates, while accepting also high maintenance costs- that is now driving huge programs for cost reduction, rationalization and productivity improvement. Big Data has become one of the top three priorities for at least 55% of mining industry participants, which, when added to substantial investments in communication technologies that will take place over the next few years, creates a big opportunity for service providers to capitalize on -while offering the potential of considerable benefit for customers.

Predictive analytics is a set of statistical tools (kernel based) very suitable for working with massive data for pattern recognition. This is different from “model based” condition monitoring that usually utilizes parametric models to monitor asset behavior according to design parameters, thresholds and trends. Predictive analytics monitors relational behavior of process and machine variables with the goal of detecting abnormal behavior that will likely lead to an (abnormal) trend reaching some warning limits. So predictive analytics enables earlier warnings compared with conventional condition monitoring, delivering failure modes prediction and eventually calculating a prognosis of the failure enabling the customer to transform unplanned to planned maintenance. This technology is already bringing value to industries such as power generation or oil and gas and is ready to go and be applied in the mining industry.

Adding predictive analytics to conventional condition monitoring systems is however not a trivial issue to solve. Until recently this has been mainly a niche market, but now some major technology companies have been acquiring capabilities by buying up specialists, confirming that analytics based offerings are increasingly considered a competitive advantage. Examples include GE’s acquisition of Smart Signal (2011), Schneider Electric’s acquisition of InStep (2014) and Caterpillar’s acquisition of Uptake (2015).

It should be noted that these companies are following a different strategy than companies such as ABB or Siemens, who have developed their own remote monitoring solutions (ABB GMD Beat or Siemens remote monitoring systems). They are aiming for equipment agnostic and more general solutions based on a SaaS (Software as a Service) approach, thereby reducing need for capital investment and software maintenance and targeting a larger market.

Good news for customers is that industrial IoT / analytics applications are not an exclusive domain of OEMs who are (still) very focused on big capital projects. Sooner rather than later we will probably see several new (pure play service) competitors entering this field, the new offerings (industrial Apps) bringing additional dynamism and helping expand the market.

Daniel Rojas Acuña  is a Solutions Consultant with GE in Chile focusing on big data analytics and IoT for mining applications.  Previously he worked as a project engineer for Andritz and as a specialist for remote diagnostics services for ABB. He holds a Bachelor’s in Electronics Engineering from Universidad de la Frontera (Chile) and a Master’s in Electrical Engineering, with specialization in control and automation as well as a Dilpoma in Operations Management from Pontificia Universidad Católica de Chile

Disclaimer: The views and opinions expressed in this article are those of the author and do not necessarily reflect the opinion or position of Service in Industry or its owners 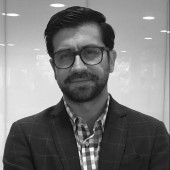 Consultant and technology entrepreneur for Digital Transformation through exponencial technologies with a strong focus on IoT / Analytics based solutions.

Demand Response – the smart way, as a Service

Service in the wake of COVID-19: Uptime at a fraction of the cost

Predictive Maintenance Systems may take a long time to commercialize